Yesterday there were some changes made to the Nike API that prevent us from syncing Nike runs to Smashrun. We’re looking into a resolution and will keep you posted.

We’ve reached out to the people at Nike’s API partner program. The program has been closed for some time, but we’re hoping that they might make an exception. We’re waiting on their response now.

Nike import is BACK UP. Still unofficial, but it’s working.

Yesterday Garmin invalidated the passwords of many users of Garmin Connect. If you’re having trouble syncing you’ll need to first login to Garmin Connect. Once there, you’ll be prompted to reset your password. After that go back to Smashrun and update your password on the Settings -> Sync page. You should then be able to sync without issue.

Note: If you’re logged in on Garmin Connect’s site already, you may need to logout and login again to receive their reset your password prompt. 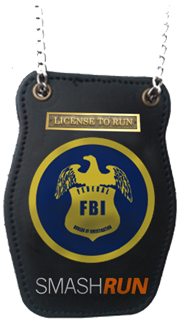 We got bored working on the demographic ranks and waiting for Garmin to take our (your) money, so this weekend we decided to create some cool new badges. Since there’s absolutely no cooler badge than an FBI Special Agent badge, that’s exactly what we made.

Every year FBI agents need to meet minimum fitness requirements to pass their annual physical. This includes a 1.5 mile run within an age/sex graded pace. The minimum requirements to pass are fairly reasonable for most experienced runners, but to really excel they’re pretty challenging. So we’ve created 2 new Smashrun PRO badges. The Special Agent Badge – meet the minimum requirement for an FBI Agent, and the Super Agent Badge – score within the top 5% of all FBI agents. Good luck!

We’re still waiting for Garmin to sign off on our API request, but as soon as they do we’ll push it out to our beta testers. If you’re a pro user and want to help beta test the new API just shoot us an email.

If you’re in the market for a new running app (as I suspect many of you are) we’ve just gotten word that iSmoothRun has slashed its price by a whopping 60% for the next couple days. So for $1.99 you can get a rock solid app that exports directly to Smashrun, Dropbox, and a ton of other running sites.

When we started Smashrun we thought data viz + badges + running = awesome. But what we didn’t know then, was that we’d literally spend 80% of our time building a data aggregation platform against a quicksand of constantly changing API’s. Or that we’d be begging, buying and pleading our way just to be allowed access to any data in the first place. The remaining 20% of the work we’ve done has resulted in everything most people think of as Smashrun. It’s insanity. When you record a run, it should be just like taking a picture. You should own the finished product and you should be able to post it to any site you want.

So here’s the deal. We want life to be easier for our users. We want you to have great data. We want you to able to use any website or app you want without worrying about how it’s going to mess up your training history. So we’re offering a bounty to any app that integrates with Smashrun.

We have a great API. Its design is the product of learning from the work we’ve done with dozens of other fitness API’s. It favors data quality, simplicity, efficiency, and robustness — in that order. It’s vanilla OAuth. Some developers have built an integration with it in less than a day, and we’ve got tools to make debugging easier.

We’ll pay $5/yr for every Smashrun Pro user who uses the app integration.
Note: People may use many different apps, so see full terms.

This is, naturally, subject to approval and applies only to mobile apps and hardware devices, not fitness syncers – you must be the originator of the data.

So please spread the word!

Please tell your favorite apps or, if you’re a developer, maybe now’s a great time to build your own.

Apply for access to the Smashrun API and let us know if you’re interested in the app integration bounty.

We’ve finished the initial development of the new Garmin API Autosync integration. We’ll begin a very short beta period after Garmin flips the switch next week, following which we’ll roll it out to all pro users.

It appears that the runs from the new Nike Run Club app aren’t made available through the Nike API. Right now, we’re not sure what we can do to get them. Either they’re there, or they’re not. This is frustrating to say the least. Between the recent changes to the Nike website and the new changes to the app we’re hearing a lot of negative feedback, and I’m not sure what the fallout will be. If anyone uses any apps that successfully get data from the new app, please give us a heads up. Right now, it looks like every app we know of that uses Nike data is broken…

The response from everyone has been truly astounding. We’ve already hit our goal, so we’re dropping the donate button – we’re really blown away by the support we received. We’ll keep the sale running to give everyone a chance. Thank you to everyone. We’re super excited to make this a reality.

One last thing. We added FIT support yesterday (mouse over gear in upper right and select import file). This is a prerequisite for the new Garmin API, so if you get a chance to import a test run or two it’d be great to get some feedback/bug reports. For most watches, a FIT file is used to represent the raw data as recorded by the watch, so it’s almost always going to be the best format to import.

Lately we’ve been spending a great deal of time working around Garmin synchronization issues. We sync with Garmin Connect, but we’re not an official Garmin API partner. Official partners pay $5,000 to get files pushed directly from Garmin watches. Thus far, we’ve resisted this route both out of principle and shallow pockets.  But it’s become clear that we’re not in a position to do so much longer. The method we’re currently using has gotten increasingly buggy recently, and it threatens to disappear entirely. We’re going to need to suck it up and make a change.

We’re not a big funded startup. We’re just Jacklyn, Chris and Steve, and we could use your help getting the cash together. So, from now until we raise the needed funds, we’re going to slash the price of Smashrun Pro by 25%. If you’ve thought about buying a Pro Membership for yourself or someone else, then now is a great time. Once we connect to the official Garmin API, Smashrun Pro users will never have to click the sync button again. And, of course, when/if/probably Garmin removes their “unofficial” API, we’ll enable auto-sync for all users.

A few other items:

UPDATE: Some people asked for a Donate button, so we added one below. (You guys are awesome!)

(We hit the goal, and removed the donate button I can’t believe how quickly and how generously this was received. Excited to start hacking away and building!)

In the past few weeks, we received over 200 unique suggestions for demographic ranks. They ranged from “3 kids, 2 cars, and a house” to “Borderline Alcoholics” (actually, likely some significant overlap there). If there’s one thing that quickly became clear from this whole exercise, it’s that the ability to create groups is far more interesting than “demographic ranks.” A lot of the suggestions would make awesome groups, but kind of so-so demographic filters (we’re looking at you, Disco Runners). So, the crowd has spoken and been heard, and we’ll plan to add groups to our development timeline.

Nevertheless, demographic ranks is what we promised, and so that’s what we’re working on. The next step is to pare down the list, since a rank needs at least 100 people onboard in order for it function.

To do this, we merged any duplicates and similar suggestions, and we dropped demographics that had less than 10 members. You can imagine that this was a long, drawn-out, and somewhat painful process for us, because who’s to say that “Soft and Sporadic” and “Middle-Aged Beergut Ultra” wouldn’t make good demographics?

If the demographic you chose has been merged with another or dropped because it didn’t have enough votes, you’ll be prompted to choose again. Note that we will keep the traditional demographic categories including: “Everyone”, M/W, M/W < 30, M/W >30, M/W >40, M/W >50, M/W >=60. The custom demographics that resulted from the merge and cut are (drum roll please):

The Smashrun ranks have always lumped everyone together. Grandmothers are comparing their 5k times to college track stars. It’s pretty discouraging.  So, starting soon, we’re going to calculate individual ranks for distance, discipline, and speed across different brackets. We could have implemented the familiar age and gender related delineations, but in case you haven’t noticed, we like to do things a bit differently.

In a perfect world, brackets would match your peer groups. Who do you really compare yourself to? It might be your fellow ultra-trail runners, or it could be other people working on losing their winter beer belly, or other women who just had their first child. Lines like those are hard to draw, so we need your help.  When you visit the ranks page, you’ll be able to vote for an existing demographic or create your own, and see who joins. After a few weeks, after the dust settles, we’ll take the top 10-20, and make them permanent.

There’s a few things you’ll want to keep in mind.

First, I know it might seem like a site as incredible as Smashrun must have a gazillion users, but there’s actually not all that many of us (I know, I know, we’re shocked too). So you’ve got to be thoughtful about your suggestions. It would be awesome to create a group for 2nd year law students in Guatemala, but you’ll have to get at least 100 people on board for us to be able to build rank.

Second, you’ve got to remember this is a vote. If there’s not enough people we can’t build a useful rank. With just a few people you’ll get bumped around too much by other people’s changes in activity. So, when you choose a demographic you’ve got to choose one you think other people will choose too. And remember to see if the rank you want already exists before you create a new one.

Lastly, I know it’d be incredible if we could simultaneously rank you across many different demographics, but I’ll be honest with you – that’s really, really hard, and we’re not that smart. You’ve got to pick your best demographic, the one that really sums up how you’re different than the average runner.

It’s one giant experiment. We have absolutely no idea how it’s going to turn out. Maybe we’ll end up with cross-dressing zookeepers, as a demographic rank. It really does slow you down when you step in elephant poo in heels, so it could make sense…

We’re currently experiencing issues getting pauses from Garmin sync, It’s likely they will likely resolve it on their end in the next few days. In the meantime if you experience the issue, it can be resolved by importing the TCX file which will register the pauses correctly. Apologies for the inconvenience.