So last week: I posted my 2011 running report on Quantified Self’s LinkedIn group and got a message from someone who said I should also tweet it. Of course, that was easier said than done, especially because my post was so darn long:

Consider it our first step towards many more tweeting action for your sharing preferences. Keep an eye on that bouncy bird on the right… one day, that little guy will move on to doing bigger and better things within Smashrun….. but, for now, he’s sticking around so you can tweet your 2011 running stats. 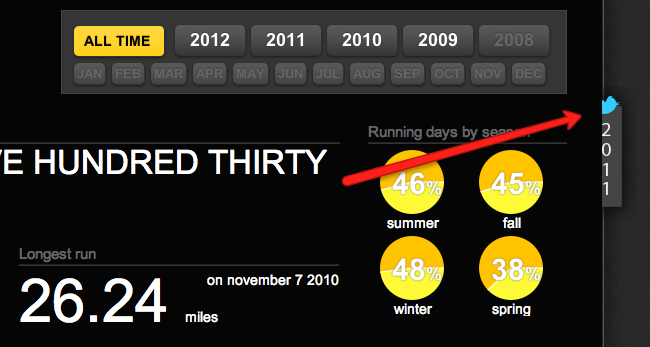 I just tweeted my 2011 stats! I am a huge fan of the site and was an early adopter (Veteran Badge). Keep up the good work and I hope you great success in the future.

That’s awesome. We were a bit late to the end of year party with this feature, but glad it’s still useful. I’m thinking about setting it up so you can tweet the stats you’re currently viewing (by month, by year, all time), and adding a Facebook button as well. Do you think this seems like a convenient and not too distracting place for this?

Love it and all of the new improvements that have been happening on the site! Keep up the good work!

Hi!! First of all thanks, loving Smashrun!

It’s probably just my user, But i’ll keep in touch just in case.

Hmm…it seems like under some certain conditions the badge calculation aren’t running after every run. I’ll definitely try and resolve this in the next release. In the meantime you delete/undelete a run from the run list page, or wait til you save your next run and the badges should get recalced.

Sorry about that, nothing more annoying than not getting the badge you deserve right after you finish an 8 mile run.

First of all thanks for your reply! At first it seemed to work (got the 50M badge).

I’ll wait anxiously for the fix… 🙂

Thanks again for everything and keep up the good work.

I put a few fixes in place the last couple of days. So long as you booked the runs after you registered you should be getting the correct badges now. If not let me know and I’ll look into it.

Really a nice app! You guys have done a excellent job putting this together, and the layout is great! I am a serious runner, but I don’t feel the need to get a GPS at this point, so I just use the Nike+. So thanks for an app for those of us that use that for our runs!